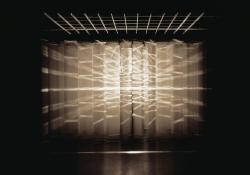 Along with his fellow members of the Groupe de Recherche d’Art Visuel (GRAV), in the 1960s Julio Le Parc broke radically with artistic convention, rejecting static images in favor of a dynamism that placed works of art in a constant state of flux, eliminating the possibility of fixed viewpoints. The animated play of light in his lumino-kinetic pieces transforms space, continually dissolving and recreating it and making the viewer an integral part of a Gesamtkunstwerk.

Le Parc’s kinetic works resist interpretation in specific terms. That is the artist’s intention. Seeking to grant a greater measure of self-determination to his viewer-participants, Le Parc would be the last to impose a particular view on them. The profoundly human character of his work, and its political dimension, lie in this rigorous eschewal of absolute claims. This is a free and democratic art, full of respect for humanity, anti-authoritarian, and averse to the cult of genius.